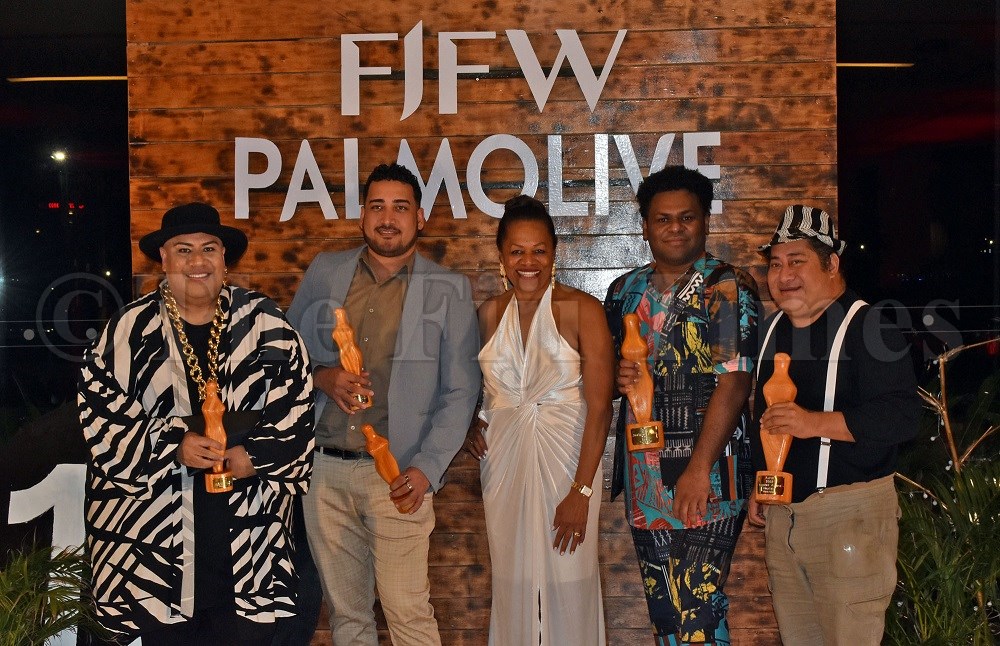 Fiji Fashion Week managing director, Ellen Whippy-Knight, middle, pictured with some of the award recipients from left, Samson Lee, Michael Mausio, Epeli Tuibeqa and Hupfeld Hoerder with their awards after the awards ceremony at the Grand Pacific Hotel in Suva on Thursday, August 25, 2022. Picture: JONACANI LALAKOBAU

Fifteen years after she kicked off Fiji Fashion Week, Ellen Whippy-Knight says she is amazed at how big the event has grown and the talent it has helped bring into the limelight.

Speaking at the FJFW anniversary dinner and awards night on Thursday at the Grand Pacific Hotel in Suva, she said none of it would have been possible without sponsorship.

“These shows can’t happen if we don’t have the finances and every global fashion week has its sponsors,” Ms Ellen-Knight said.

“Without our sponsors, we would not be where we are today.”

Ms Ellen-Knight said FJFW’s decade and a-half journey was something to be celebrated, given none of the founders had worked or had any experience in the industry prior to putting the show together.

“I can’t believe the journey we have been through – the challenges, trials and tribulations,” she said.

“However, here we here 15 years later and I think that is what matters most.

“Still strong, sticking to our plans and objectives and delivering what the community wants from us when you are talking about the fashion industry.

“But most importantly is the journey these designers have been through in the last 15 years.

“When we came together, none of us had worked in the fashion industry at all.

“I have been fortunate enough to be living in Australia to go to many Australian fashion weeks and not even knowing that at some stage I would be involved in running a fashion week.”

Ms Whippy-Knight said once they got through the first show in 2008, they knew they were onto something.

“We have never run a show before, yet the people who came from Australia and New Zealand to see that fashion show were surprised and said it was the most fantastic show they have been to in a while.

“And 15 years later we have just developed our skill and now present to you what an international fashion show should really look like.”

Facing the uncomfortable possibility that healthcare is discriminatory | NHS